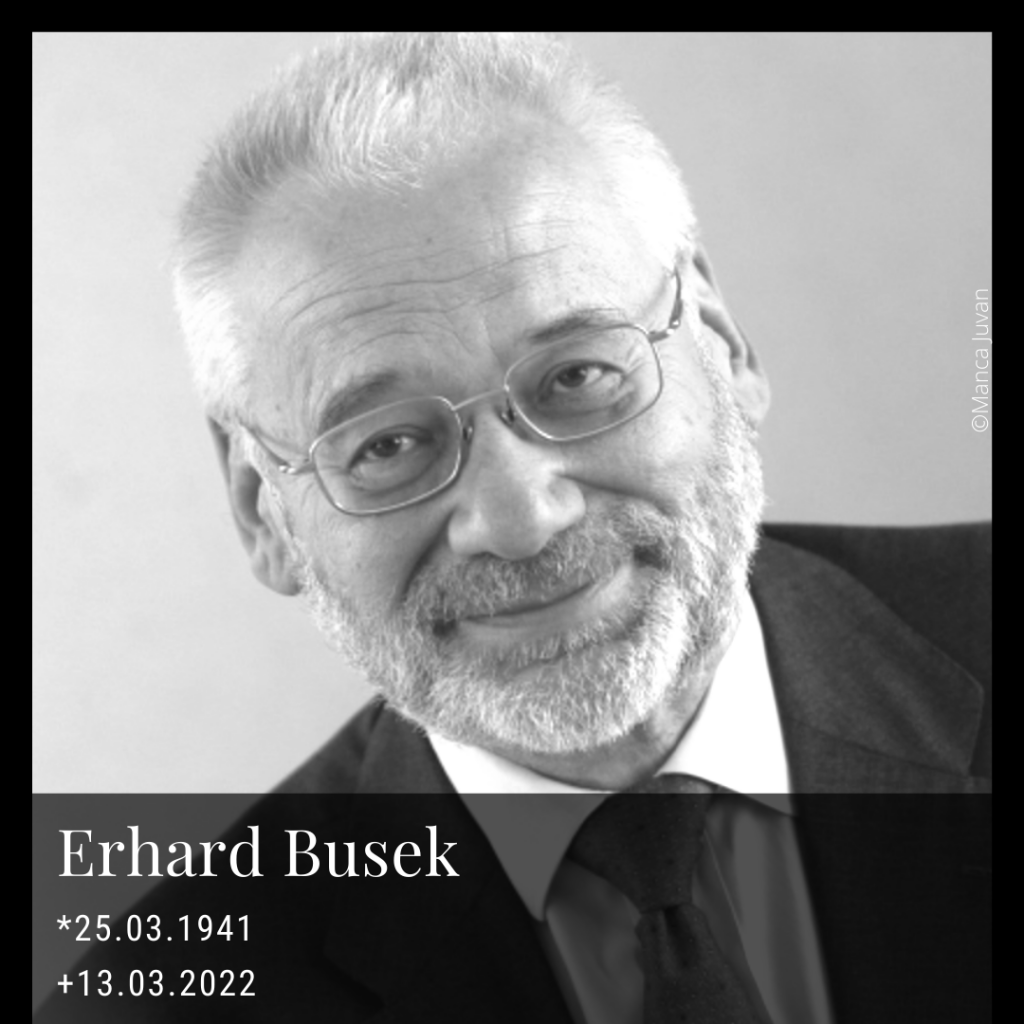 Busek attended the humanistic Bundesgymnasium Wien XIX and passed the Matura with distinction in 1959. He then studied law, which he also completed as a student trainee, and graduated in 1963 with a doctorate in law. Busek began his political career in 1964 as Second Club Secretary of the Austrian People’s Party (ÖVP). In 1968 he joined the Federal Executive of the Austrian Economic Association, was its Deputy Secretary General from 1969 and its Secretary General from 1972 to 1976. From 1975 he sat for the ÖVP in the National Council and was appointed the party’s new Secretary General in the same year. He relinquished this office a year later after being elected provincial party chairman of the Vienna People’s Party. From 1976 Busek was also a city councillor in Vienna and became deputy mayor in the Vienna City Hall. In order to be able to devote himself fully to his municipal political work, he resigned from his National Council mandate in 1978. In February 1980 Busek became deputy federal party leader of the ÖVP, and in May 1981 he also joined the presidium of the ÖVP Economic Association.

Busek was also involved in many political fields, including environmental, education and health policy, and continued to be a brilliant expert on Central and East European policy. In 1989 Busek was appointed Minister of Science and in 1991 Vice-Chancellor. In 1992, as Minister of Science, Busek sought the “emancipation of universities away from the centuries-old tradition of regulatory addiction in this area” with the controversial draft of a new University Organisation Act (UOG) and a study reform. In 1994-1995 he took over as Minister for Education and Cultural Affairs.

After leaving the government, Busek initially resumed his work in the National Council, but resigned again in July 1995. He found a new task away from current day-to-day politics at the Vienna “Institute for the Danube Region and Central Europe”, of which he was chairman. His office in Hahngasse in the 9th district was until the end not only a meeting place for international political guests and journalists from the region, but also for those seeking advice and all those seeking expertise and contacts in Eastern, Central and South-Eastern Europe. Above all, the office was always a place of open doors and conversations thanks to the warm hospitality of Busek’s assistant and long-time colleague Gabriele Buchinger.

As early as the 1960s, Erhard Busek travelled to the countries behind the Iron Curtain to get his own picture of the political and social conditions there. He maintained relations with the opposition of the Prague Spring of 1968 in Czechoslovakia, was a member of the dissident movement “Charta 77” and was also privately closely networked with civil movements and opposition groups in the former Eastern Bloc. After 1989, Busek therefore enjoyed great trust among the new political leaders. In December 1996, he was appointed coordinator of the “Southeast European Cooperative Initiative” (SECI) provided for in the Dayton Agreement and thus took over the promotion of cross-border economic cooperation between ten Balkan states.

In March 2000, he was appointed “Government Envoy for EU Enlargement”. Busek’s task was, on the one hand, to communicate the Austrian positions to the accession candidates and, on the other hand, to solicit understanding for the aspirants in Austria. From January 2001, as “Coordinator for the International Stability Pact for South Eastern Europe” (today: Regional Cooperation Council – RCC), he was actively involved in supporting the reconstruction of the countries shattered after the civil wars.

Beyond politics, in addition to several activities in the economy, including as President of the Vienna Economic Forum (2005-2016), he was also frequently active in higher education, for example as Rector of the newly founded Salzburg University of Applied Sciences (2004-2011), as a lecturer at the Vienna University of Technology and as a visiting professor at Duke University in North Carolina, USA. In 2008 he was awarded the Jean Monnet Professorship ad personam, which he held at the Salzburg University of Applied Sciences and the University of Graz. The higher education landscape of South-Eastern Europe was a particular concern of his, which is why the former Minister of Science continued to promote academic education in the region as Chairman of the Supervisory Board of the “IEDC-Bled School of Management” in Slovenia and as a patron at the Center for Advanced Studies Southeast Europe (CAS SEE) in Rijeka. This also includes the Danubius Award presented by the IDM and the Federal Ministry of Education, Science and Research since 2011, which has also been supplemented by the Danubius Young Scientist Awards since 2014.

The promotion of the joint reappraisal and communication of history was just as important to Busek as reconciliation in the Western Balkans. From 2008 to 2018, he was also Chairman of the University Council of the Medical University of Vienna and subsequently a member of the Supervisory Board of the MUW. A great lover of culture, Busek was, among other things, President of the Gustav Mahler Youth Orchestra, President of the Chamber Music Festival Lockenhaus and Vice-President of the Gottfried von Einem Foundation.

Farewell to a role model and friend

As IDM Chair, he was keen to “not be a think tank, but a do tank”. Among the more recent testimonies to his role as a critical thinker, admonisher and taboo-breaker is his book “Balkans to Europe – Now!”, published in 2021 together with IDM Managing Director Sebastian Schäffer, in which the two call for the Western Balkan countries to join the EU as soon as possible.

It is the combination of Busek’s extensive knowledge, his close-knit network, his love for the region and his profound experience that makes his award-winning and lasting contribution to the region so unique. With his death, we lose a committed representative of the idea of a united Central Europe, a Danube enthusiast and an active European to the end. His unyielding commitment to mutual understanding, readiness for dialogue and his never-ending curiosity and openness for the people and their concerns in the Danube Region will continue to guide us in our activities.

Dear Dr Busek, dear Erhard, thank you for your many years of incredibly energetic work, your inspiration, your humour and your curiosity, which have never been lost on you despite all the ups and downs in the region and in life! You will remain a role model for us and many others as a champion of regional cooperation.

Honorary Professor of the University of Rijeka (2021).

“Grand Decoration of Honour in Gold for Services to the Province of Vienna with Star”.

Decoration of Honour “For Services to Polish Culture” (2003)

Honorary Senator of the Medical University of Innsbruck (2009)

“Golden Badge of Honour of the Municipality of Alpbach” (2009)

“Decoration of Honour of the Province of Salzburg” (2012)

“Honorary Citizenship of the Municipality of Alpbach” (2012)

“Golden Decoration of Honour of the Province of Styria” (2013)

“Grand Decoration of Honour of the Vienna Medical Association” (2016)

“Honorary Citizenship of the Municipality of Lockenhaus” (2016)

“Grand Decoration of Honour of the Province of Burgenland” (2017)

“Grand Decoration of Honour of the Vienna Medical Association” (2018)

“Honorary Senator of the Medical University of Vienna” (2019)

“Order of Prince Branimir with Neck Ribbon” from Croatia (2021)