You are here: Home1 / North Macedonia 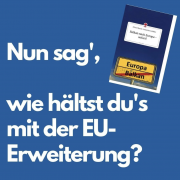 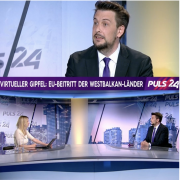 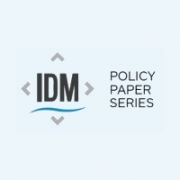 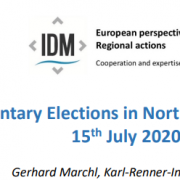 The whole discussion is available on the YouTube channel of the IDM: 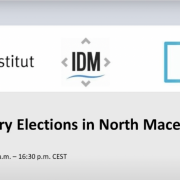 Despite the fact that North Macedonia managed to settle the name dispute with neighboring Greece, as well as cultural issues with Bulgaria and got the green light from Brussels to start accession talks, the enthusiasm for Zoran Zaev and his government among the citizens seems to be deflating. How is the current political situation in North Macedonia? Is a reliable prognosis of the upcoming elections possible? Which future developments are likely? The Institute for the Danube Region and Central Europe (IDM), in cooperation with the Dr.-Karl-Renner-Institut and the Political Academy of the ÖVP, organized the online panel discussion “Parliamentary Elections in North Macedonia”.

Briefing on the current situation in North Macedonia: Dr. Gerhard MARCHL, Head of the Department of European Politics, Karl-Renner-Institut, Vienna 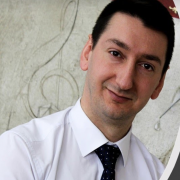 We will look at the current situation in NorthMacedonia, which has recently gone through a second wave of COVID 19 infections in the country – although the state of emergency has not been extended. Despite all efforts taken by the government many questions remain. Will North Macedonia be able to cope with the economic setbacks caused by the Coronavirus pandemic? What are the consequences for the healthcare sector? Can there be a prognosis for the upcoming elections? Erhard Busek (IDM) will talk with Pishtar Lutfiu, the former Minister of Education and Science of North Macedonia. Lutfiu was the president of “Alpbach Forum Macedonia” and is currently a board member of the “Fund for innovations and technology development” and project coordinator of the research and analytic center “Abdilaqim Ademi”. Beside that he worked as well in the Secretariat for Implementation of the Ohrid Framework Agreement (SIOFA) in the Government of North Macedonia.